Scroll Down to discover

Traditional mouth soaping –  so you want to give me cheek ?

Washing out the mouth with soap is a traditional form of physical punishment that consists of placing soap, or a similar cleansing agent, inside a person’s mouth so that the person will taste it, inducing what most people consider an unpleasant experience. This form of punishment was especially common in the United States and United Kingdom from the late 19th century until the mid-20th century. 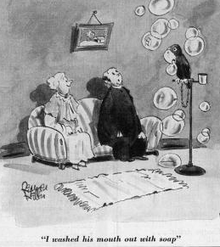 Washing out the mouth with soap is most often used as a response to profanity, lying, biting,[1] tobacco use, or verbal disrespect. It functions both as a symbolic “cleansing” following the infraction and as a deterrent, due to the foul aftertaste. It is commonly used as child discipline or school discipline, and is more frequently employed by mothers than fathers.[2]

This punishment still has advocates today, even though its use has diminished considerably in recent years in favour of discipline methods that are not considered violentor humiliating.